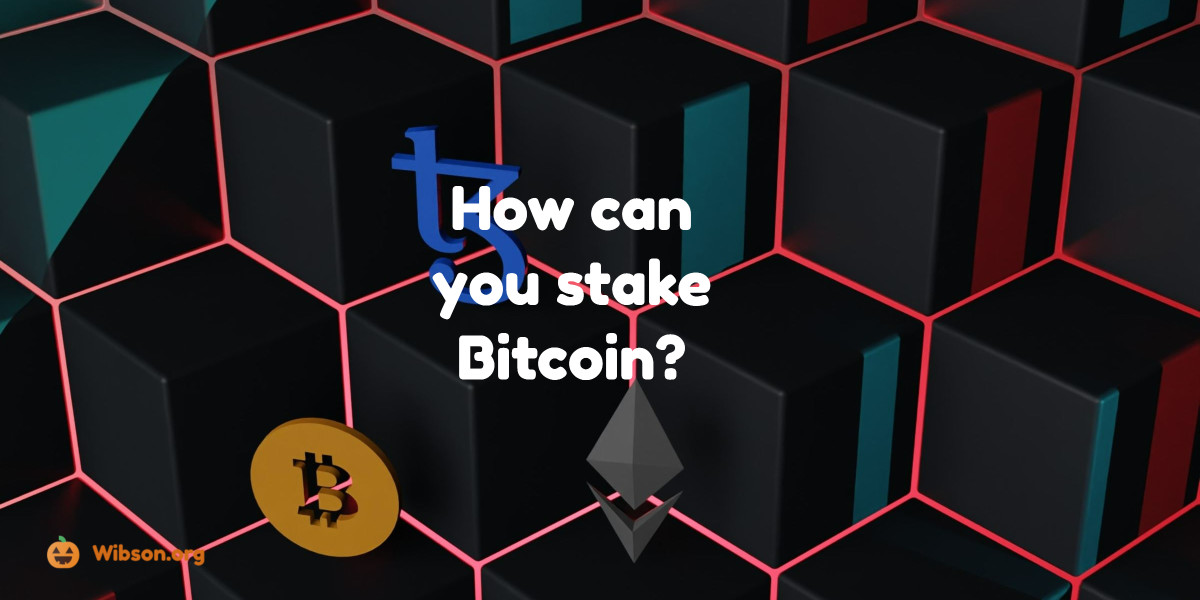 In the vast (and often intricate) world of cryptocurrency, staking is one term that has become much more common in recent years. But what exactly is staking, and how would you stake bitcoin, for instance?

Bitcoin itself cannot be staked, as Bitcoin uses a proof-of-work system and not a proof-of-stake system. However, one can earn staking rewards using other cryptocurrencies, and then exchange those rewards for an identically valued amount of Bitcoin.

But how, exactly, does one stake a cryptocurrency? And what is it about bitcoin that does not allow it to be staked? This article will attempt to explain some of the basics of cryptocurrency staking and Bitcoin.

Why Can’t Bitcoin be Staked?

Bitcoin, like (virtually) all cryptocurrencies, is a decentralized currency whose value is not guaranteed by any sort of bank or government agency. Cryptocurrencies are built upon a concept called the Blockchain. The Blockchain is essentially a ledger of all transactions made with a given cryptocurrency.

Every time a transaction is made, some form of verification must be made to ensure the transactions are legitimate and secure. Without this security, someone could make false changes to the blockchain ledger, essentially devaluing the currency through illegitimate transactions.

There are two main types of verification for blockchain transactions: proof-of-work (PoW) and proof-of-stake (PoS) are the two most commonly used verification, as well as being the most important in the context of this article.

These verification methods are sometimes known as Sybil deterrence mechanisms and are meant to prevent the possibility of falsifying transactions. Bitcoin cannot be staked (instead, it is simply “mined”) because it uses the PoW method and not the PoS method of verification. In other words, it is impossible to stake Bitcoin due to the security methods its continued existence relies on.

Bitcoin could theoretically be converted to a proof-of-stake system, but to do so would take several years and it would have to be agreed upon by the majority of the community. In short, it’s not likely to happen anytime soon, if ever.

There are some longstanding fears about a theoretical 51% attack in which someone who controlled 51% of mining machines in the network would be able to verify false transactions and thus destabilize Bitcoin’s security, but the chances of this happening are extremely low. It would take an absolutely massive amount of computing power to singlehandedly control 51% of the machines that create and earn new bitcoins.

Proof of work is a verification method used to ensure the legitimacy of transactions made on the blockchain and is a form of consensus mechanism. Bitcoin popularized the proof-of-work consensus method. In it, various cryptocurrency miners use computing power to solve cryptographic puzzles that legitimize the transactions being made in the “batch” of transactions they receive, and it also results in the creation of new Bitcoin (or whatever cryptocurrency is being mined) simultaneously.

A small percentage of that newly created currency goes to whoever was able to solve the aforementioned cryptographic puzzle first. This security method is essentially a race run by every participating computer on the planet simultaneously.

Proof-of-work is an extremely secure security measure, but it does come with some drawbacks. The system can become overwhelmed by massive amounts of transactions, which could cause delays and greater fees for those trading said Bitcoin.

In addition, there are also drawbacks to the proof-of-work system that are monetary in nature. The computational puzzles involved in PoW systems are solved based on the amount of computing power being invested in solving them.

This means that those who do not have incredibly powerful computers or the resources to buy such computers have a high chance of doing lots of computing work but receiving no reward for it. This is because only the first users to successfully generate a new Bitcoin receive any financial compensation. This could mean a high energy bill with virtually nothing to show for it.

After all, there are many large companies these days that purchase huge bitcoin mining farms that can outperform any single user’s setup. These issues have led some to argue that bitcoin mining is hardly worth it anymore. However, there is an alternative to Bitcoin’s method of verification, and it is called Proof-of-Stake verification.

Proof-of-Stake is the other most common form of cryptocurrency or blockchain verification. It works in a vastly different manner compared to proof-of-work, although it is still a consensus algorithm and thus still requires the majority of blockchain network computers to verify new transactions.

The way PoS works is somewhat complicated but can be boiled down to a few key concepts. If Bitcoin’s proof-of-work method is analogous to every participating computer on the blockchain network running a race simultaneously, then proof-of-stake is more like if one person was randomly selected to run a race on their own.

Several different coin owners must own and then stake a certain amount of coin. For ETH or Ethereum, that amount is 32 coins, but it differs depending on the cryptocurrency that we are talking about.

The consensus method, or the process by which new blocks of transactions are agreed upon as legit by coin users, can differ depending on the cryptocurrency that is using the proof-of-stake system. Ethereum, for example, is planning on introducing a “sharding” system. This would have 128 validators work to produce shards that together create one shard block, which must then be approved by 2/3 of the validators.

The short of it is that in a proof-of-stake system, you can voluntarily agree to have your coins be “held”, meaning that for a certain amount of time, you won’t be able to withdraw/exchange them for any other currency. This in and of itself can represent a risk in the form of a missed opportunity: if the value of the coin you are staking were to rise drastically overnight, you would be prohibited from selling any of the coins that you have “staked”.

Staked coins are essentially collateral: if a validator, or person that has staked some coin, properly verifies a transaction, they receive some of the transactional fees as a reward. If they choose to validate a false transaction, and the rest of the community decides that said transaction is false, then some of their staked coins, or collateral, will be “burned”, and thus cease to exist.

Unlike bitcoin, a 51% consensus by all the validators involved in verifying transactions could not succeed in allowing an attack on the network. Instead, 51% of all coins that are being staked would have to be owned by the same individual entity in order to be able to pull off an attack. The amount of money that would be required in order to do this would be immense, making it highly improbable.

However, there are some ways in which proof of stake is less secure than proof of work. For example, it would be theoretically possible to pull off a low-cost bribe attack in order to convince validators to validate a false transaction. this attack simply couldn’t occur under bitcoin’s proof of work system due to the need to find hashes (do computational work).

Overall, though, proof-of-stake is a system that gives a more equal chance to those involved to earn rewards compared to the equipment and energy-intensive proof-of-work system. It is also very secure, although there are always efforts being made to make it even more so.

What are the Risks and Rewards of Staking Cryptocurrency?

There are both risks and rewards involved in staking cryptocurrency that should be considered.

Some of the risks involved include:

Some of the rewards/benefits are as follows;

How to Stake Common Cryptocurrencies

The most commonly staked cryptocurrency right now is ETH or Ethereum. As of now, at least 10% of Ethereum is staked. However, there are also dozens more cryptocurrencies that use a proof-of-stake system and thus can be staked.

Below are some of the cryptocurrencies that are available to stake using Binance, along with the estimated APY or annual percentage yield (or your real rate of return on said investment). This number can be helpful for seeing at a glance how much of an increase you will see from a coin you want to stake.

There are a few different kinds of staking available on Binance.com. These options differ in availability depending on the coin you want to stake. Some of these include:

Staking with Binance is typically a pretty great way to stake coins if you are a beginner. In fact, some of the rates they offer for when you stake are higher than the market rate you would get staking those coins directly.

Therefore, while you may lose out on some potential profit due to the percentages Binance takes from staking rewards, you are likely to receive nearly just as much if not more than you would staking it on your own. This is primarily because Binance does some other things with the money you are giving to them that can be even more profitable.

The following youtube video is a pretty good guide to staking as a beginner on Binance. Note that some of the information may be slightly different on Binance.US, as it is a separate website from the main site Binance.com. And remember, just like mentioned earlier, Binance makes it really easy to exchange any staking rewards into Bitcoin if that’s your end goal. Happy staking!